Daisy's Pet Retreat
Your pets home away from home. 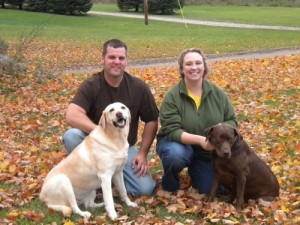 kennel since April 2006.   Brad has an Associates Degree in Diesel Mechanics and Business Management from Northwestern College in Lima, Ohio. Brad is an integral part of the kennel, not only does he help with the everyday activities such as walking and playing with dogs, he also is the sole maintenance and grounds keeper at the kennel. He is the person all the staff calls when something needs to be fixed! Brad‘s creative problem solving skills are an asset to kennel maintenance since hardware stores typically do not carry “how-to“ books on mending dog kennel enclosures due to chewing or how to keep dog escape artists in!  Brad also maintains and mows all the beautiful lawns at the kennel to ensure the grass is never too long for your four-legged friends.

Jen is the heart and soul of the kennel. It was Jen’s idea to purchase the kennel after dropping off Daisy there in early November 2005 for their honeymoon. After seeing the for sale sign, Jen’s imagination took over, which anyone who knows her can attest is hard to control!  While Jen was attending Michigan State University completing her degree in Animal Science she began researching purchasing the kennel.  Shortly before graduation and after several months of research Brad and Jen took a leap of faith and decided to purchase the business in February 2006.  The dogs and kennel are her life’s passion; she is dedicated to ensuring each dog that is boarded at Daisy’s Pet Retreat is given the best possible care.